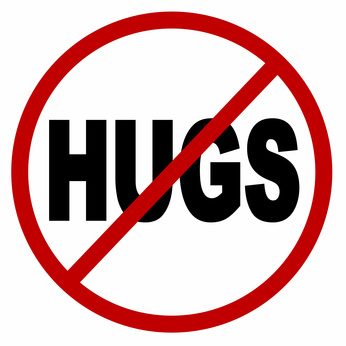 the situation
One of your top level managers is known to frequently hug female employees, both in the workplace and outside of work.   A female employee who has worked for your company for a number of years ends up filing a charge with the EEOC, asserting a hostile work environment in violation of Title VII, claiming that based upon this manager’s frequent and unwelcome hugs, she has experienced significant stress and anxiety at the workplace.   Could your company face liability under Title VII?
the ruling
Such a claim might go to trial, at least according to a recent decision from the Ninth Circuit Court of Appeals. Zetwick v. County of Yolo, et al., Case No. 14-17341 (9th Cir. Feb. 23, 2017).  In this case, the Ninth Circuit reversed the lower court’s award of summary judgment to the employer in a case involving similar facts.
Zetwick was a correctional officer for the County of Yolo who worked under Sheriff Prieto for around thirteen years.  Zetwick estimated that over this thirteen year period, the sheriff hugged her over 100 times.    These hugs happened in the workplace, at training sessions, at award banquets, and other social events involving other employees of the sheriff’s office.  Zetwick also claimed that at one particular awards ceremony, the sheriff kissed her to congratulate her on her recent marriage, and ended up kissing her partially on the lips.  Zetwick did not complain to the sheriff directly, but did express her discomfort to others, including supervising lieutenants, who did not ever report these issues up the chain or take any action. Zetwick also claimed that she had seen the sheriff hug many other female employees, but that she had never seen him hug male employees.  She also reported observing the sheriff asking some inappropriate questions about another female employee’s weight and staring at her in a suggestive manner.
The county argued that whether Zetwick saw it or not, the sheriff also hugged male employees.  Additionally, even Zetwick herself had been known to hug other male co-workers.  The county also argued that even Zetwick described the hugs as the type that one might give a relative or friend and short in duration and that she acknowledged there were no sexual comments or other touching. But Zetwick claimed that the hugs were still chest to breast. Zetwick claimed that her workplace was changed by these hugs and that she found it difficult to concentrate and was constantly stressed and anxious about the sheriff’s conduct, which she believed had sexual overtones and thus that she had been subjected to a hostile work environment in violation of Title VII.
The lower court had granted summary judgment to the defendants, agreeing that the conduct was not objectively severe or pervasive enough to establish a hostile work environment. But the Ninth Circuit disagreed.  One problem with the lower court’s ruling was that it had incorrectly relied on the proposition that courts do not consider hugs and kisses on the cheek to be outside the realm of common workplace behavior.  The Ninth Circuit explained that it depends on whether the hugging or kissing is unwelcome and also could depend on the frequency.  Additionally, the Ninth Circuit pointed out that the lower court had, at least at one point, considered whether the conduct was “severe and pervasive,” when the correct standards is whether the conduct was “severe or pervasive.”  Here, based on Zetwick’s testimony that the sheriff had hugged her more than 100 times in a thirteen year period, and that, at the very least, he hugged female employees much more often than males (as even the defendants acknowledged), and arguably only hugged female employees, a reasonable jury could find that Zetwick had been subjected to a hostile work environment.
the point
Of course, some hugging and other forms of friendly affection in the workplace are generally not going to lead to a hostile work environment claim.  At the same time, even when a supervisor considers his or her physical affection to be friendly, a subordinate might think otherwise.  Employers need to be sure that employeers at all levels are trained regarding potential sexual harassment and hostile work environment issues.