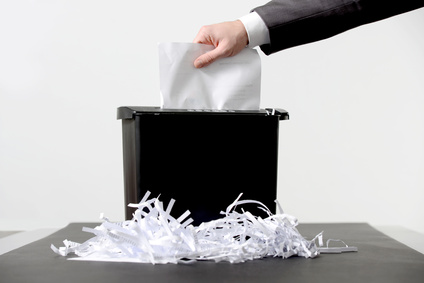 What happens if a critical piece of evidence has been destroyed—even if allegedly unintentionally and in the course of regular business? In a recent decision out of the Northern District of Georgia in a Title VII and ADEA retaliation case, the court found that the destruction of the evidence created a presumption that the stated reason for the termination of the plaintiff was pretextual and that retaliation was the but-for cause of the termination. Abdulahi v. Wal-Mart Stores East, L.P., Case No. 1:12cv4330 (N. D. Ga. December 18, 2014).

The plaintiff was a former employee of Wal-Mart who filed a lawsuit claiming that he was retaliated against after complaining about harassing conduct based upon his national origin and age. His retaliation claim was mainly based upon his termination. Wal-Mart claimed that Abdulahi was actually fired because of his misconduct, namely that he left one of the store entrances unlocked overnight. Abdulahi’s supervisor testified that he had found the entrance unlocked in the morning and that he had reviewed video footage which confirmed that the doors were unlocked overnight. However, there was no effort to preserve this video footage. Wal-Mart confirmed that the video was recorded over in the normal course of business, as there had been no specific request to preserve the video. However, Abdulahi had filed two EEOC charges asserting discrimination prior to his termination and thus filed a motion for sanctions for spoliation of evidence against Wal-Mart, arguing that Wal-Mart was reminded of its duty to preserve evidence, including the footage, when he amended one of these charges to assert a claim of retaliation.

Applying the law applicable in the Northern District of Georgia, the court explained that as the moving party, it was the plaintiff’s burden to prove (1) the evidence existed at one time; (2) the alleged spoliator was under a duty to preserve the evidence; and (3) the evidence was crucial to the movant being able to prove its prima facie case or defense. Id., p. 4 (citing In re Delta/Air Tran Baggage Fee Antitrust Litig., 770 F. Supp. 2d 1299, 1305 (N.D. Ga. 2011) and Southeastern Mech. Servs., Inc. v. Brody, 657 F. Supp. 2d 1293, 1299 (M.D. Ga. 2009)). In order to decide whether to impose sanctions, the court is to consider five factors outlined in Flury v. Daimler Chrysler Corp., 427 F.3d 939, 944 (11th Cir. 2005): (1) whether the movant was prejudiced by the destruction of evidence; (2) whether the prejudice could be cured; (3) the practical importance of the evidence; (4) whether the spoliator acted in good or bad faith; and (4) the potential for abuse if expert testimony about the evidence is not excluded. Id., p. 5.

The court found that Abdulahi had met his initial burden—showing that the video footage existed at one time, that Wal-Mart was under a duty to preserve it, based upon the ongoing EEOC investigation during the applicable time period), and that this evidence was crucial to his ability to prove his prima facie case of retaliation at trial. Id., p. 6.

Moving on to consider the Flury factors, the court then agreed with the plaintiff that he was prejudiced by the destruction of the evidence and that this prejudice could not be cured by other testimony, namely the testimony of the supervisor and other alleged contemporaneous evidence, as this other evidence was not equivalent to the video. Id., p. 8. As to the third factor, the court agreed that the video footage was relevant and has practical importance as far as plaintiff’s ability to prove his case. Id. As far as whether there was bad faith, the plaintiff argued that testimony from the store manager that he was aware that the surveillance video could contain important evidence regarding the basis for the termination was evidence of bad faith. The court found that this statement, along with the totality of the evidence, was sufficient to attribute bad faith to Wal-Mart, agreeing with the magistrate that because of the number of indications from the plaintiff that he intended to challenge the termination, a reasonable jury could find it implausible that Wal-Mart made no effort to preserve this video. Id., p. 9.

In light of all of this, the court found that sanctions were appropriate. The court ordered that there would be a jury instruction informing the jury that destruction of the video creates a presumption that the stated reason for termination was pretextual and that retaliation was the but-for cause of the termination and an award of attorneys’ fees to the plaintiff for those fees attributable to bringing the motion for sanctions. Id., p. 10.
The takeaway from this case is something we already know, but it doesn’t hurt to be reminded of—be very careful not to destroy potential evidence! We are all aware of our duty to preserve, but we need to always be mindful of it, particularly in situations where we routinely delete potential evidence (i.e. video footage) in the normal course of business.