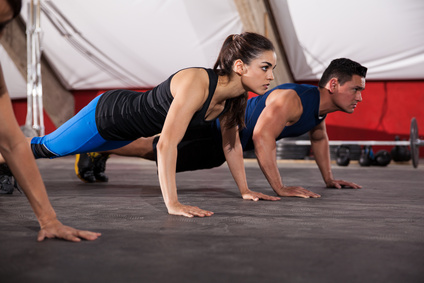 Is it discrimination for the FBI to require its male trainees to perform 30 push-ups while only requiring 14 push-ups from its female trainees in a physical fitness test? In June, a federal court in the Eastern District of Virginia ruled that it was. Bauer v. Holder, Case No. 1:13-cv-93 (E.D.Va. June 10, 2014). A male FBI trainee failed to perform the required 30 push-ups and argued that this requirement discriminated against him on the basis of sex in violation of Title VII in light of the fact that female trainees are only required to perform 14 push-ups. The Attorney General argued that this does not constitute impermissible discrimination because the different standards are based on innate physiological differences between males and females and these standards impose no greater burden on men than on women.

FBI New Agent Trainees are required to pass a gender-normed physical fitness test (“PFT”) in order to graduate from the FBI Academy. The PFT contains four individual tests: (1) one minute sit ups; (2) 300 meter run; (3) push-ups to maximum; and (4) 1.5 mile run. Each trainee has to achieve a minimum cumulative score of twelve points with at least one point in each of the four events. Each event is scored on a ten point scale with a maximum overall score of 40 points, with one point being awarded for achieving the minimum standard in an event and three points for achieving the mean. The times and/or numbers needed to achieve a point in each category differ for males and females. In the category of push-ups, a male must complete 30 and a female must complete 14 in order to achieve one point.

The minimum passing scores for the PFT were developed through a pilot study of a number of male and female trainees. The FBI chose to make its minimum standard and mean scores gender-specific to take into account the innate physiological differences that exist, on average, between males and females.

In 2008 and 2009, as a trainee, Plaintiff Jay Bauer took the PFT a total of seven times—and all but one time, he failed the push-up component. On his last effort, toward the end of training, he was able to complete 29 push-ups, but did not reach 30. He was given three options—to resign as a Special Agent and preserve the possibility of working as an FBI Intelligence Agent in Chicago, to resign and forgo the possibility of any future position with the FBI, or to be terminated from employment with the FBI. Bauer chose the first option. He subsequently filed a lawsuit in federal court in Illinois seeking reinstatement to the position of Special Agent. The case was transferred to the Eastern District of Virginia. Both parties filed motions for summary judgment.

The district court then turned to the question of whether the gender-normed PFT used by the FBI violates Title VII by requiring males to perform 30 push-ups, yet only requiring females to perform 14. The Attorney General’s argument was that “it is undeniable that, on average, there are physiological differences between men and women, and the gender-normed PFT standards simply reflect these differences to ensure that males and females are treated equally.” Id., p. 15. The district court began its analysis by considering 42 U.S.C. § 2000e-2(a)(1), which states that is an unlawful employment practice for an employer to discriminate against an individual because of the individual’s sex, and then the definition of discriminate (“to make distinctions on the basis of a class or category without regard to individual merit.”). Id., p. 16. Based on this definition, the court concluded, the plain language of the statute prohibits the PFT’s differential treatment of men and women based on their sex, and there is not any statutory exception for average, innate physiological differences. Id., p. 17. As the court pointed out, “Congress was clearly aware of any such average physiological differences, but chose to make no reference to, or accommodation for, them in § 2000e-2(a)(1).” Id.

In support of the different standards, the Attorney General pointed to lower court cases that have held that different requirements for men and women in the context of weight and grooming standards may be permissible under Title VII where the requirements impose no greater burden on one sex. Id., p. 20. However, the district court did not find this argument persuasive, finding that the “no greater burden” test cannot displace the plain language of § 2000e-2(a)(1), the Supreme Court’s directives related the same, and Congress’s enactment of § 2000e-2(a)(1) as part of the Civil Rights Act of 1991. The district court also found a number of cases from other jurisdictions related to gender-normed fitness standards unpersuasive.

Ultimately, the district court concluded that it was not finding that gender-normed fitness tests are per se illegal under Title VII (recognizing that requiring that all physical fitness tests use a single standard for both men and women would likely result in Title VII violations from tests that have an impermissible disparate impact on women). However, “the decision reached here is that gender-normed physical fitness tests are not, as some courts have assumed, per se legal based solely on the general assertion that there are real physiological differences between males and females.” Id., p. 23. Instead, “whether a particular gender-normed physical fitness test is legal and establishes appropriate standards must be analyzed under a more rigorous and exacting legal standard.” Id.

Recognizing the possibility that physical fitness tests holding males and females to a single standard could have a disparate impact on females, the district court concluded that there must be “a mechanism through which it is possible to reconcile (i) the Supreme Court’s clear holding that Title VII prohibits treating employees differently based on their sex with (ii) the risk that physical fitness tests that apply a single standard to both males and females may have a disparate impact on females.” Id., p. 26. “A sensible way to reconcile these considerations is through the application of the BFOQ defense.” Id.

The BFOQ defense allows an employer to use an explicit sex-based policy where sex is a bona fide occupational qualification reasonably necessary to the normal operation of that particular business or enterprise (often applied in cases where either men or women are excluded from a particular position as a group). Id., pp. 26-27.

Two primary requirements need to be met for a policy to be considered a BFOQ: (i) the policy must be an objective, verifiable requirement, that (ii) concerns job-related skills and aptitudes. Id., p. 28. Here, the district court found that although the PFT did satisfy the first requirement, it did not satisfy the second. The Attorney General had failed to link the PFT to any qualifications that affect an employee’s ability to do the job (and was more focused on an overall level of fitness). Id., p. 30. Under these circumstances, the district court found that the Attorney General had not established a valid BFOQ defense.

The district court was careful to note that its decision “does not deem tests of overall physical fitness impermissible under Title VII, nor does it conclude that the use of gender-normed standards for such tests of overall physical fitness is always inappropriate.” Id., p. 33. “Rather, this decision holds only that in the particular factual circumstances of this case, given the evidence that defendant has entered in the record, defendant has failed to establish that its PFT is an adequate measure of job-related skills and aptitudes, and thus defendant cannot legally justify its facially discriminatory PFT as a valid BFOQ under existing Title VII law.” Id., p. 33. Thus, the district court granted the plaintiff summary judgment in this action.