I Found My Employee’s Resignation Notice on Her Desk—Is This Considered Notice? 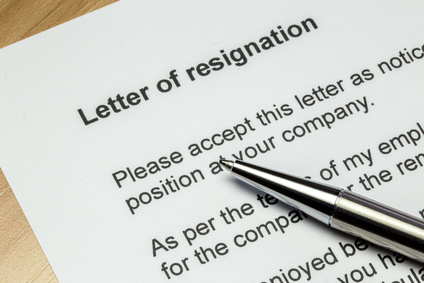 You have an employee who has been acting somewhat disgruntled.  One night, after hours, you come across an envelope on her desk with your name on it that contains a letter saying that she is resigning and her last day will be in two weeks. She shows up in the morning and you tell her that you are accepting her resignation effective immediately.  She then seeks unemployment benefits—could you be on the hook?

Perhaps so, according to a court in Fairfax facing a similar set of facts.  Harvey v. Virginia Employment Commission, Case No. CL-2016-4653 (July 20, 2016).  Darlene Harvey worked as a bookkeeper for an accountant in Herndon, Virginia for about five and a half years.  Harvey was thinking about quitting and one day, wrote a letter of resignation—saying that she was resigning and her last day would be in two weeks.  She put the letter in an envelope with her boss’s name on it and left it on her desk without giving it to him.  She came back to work the next day and did not give him the letter.  The next night, the employer saw the letter and opened it.  When Harvey came to work the next day, the letter was gone, her desk had been cleared out and she did not have access to the computer network.  She was told that her resignation was accepted, effective immediately.

Harvey submitted a claim for unemployment benefits.  The employer claimed that she had voluntarily resigned. The Virginia Employment Commission ended up finding that even though she had not actually delivered her resignation notice, she had left the envelope on top of her desk with her boss’s name on it and thus had meant for him to find it—so she had tendered her resignation.  But because the employer did not let her work the two week notice period (and she was willing to do so), she was entitled to benefits for just that period.    Harvey then appealed to the circuit court.

The circuit court ended up disagreeing with the Virginia Employment Commission and found that Harvey was not just limited to those two weeks of benefits because she had not given notice of her resignation.  Giving notice would require the employee to “take some step or affirmative action by granting, bestowing, putting into possession, transferring, conveying, delivering or offering the notice of resignation to his or her employer.”  Harvey, p. 7.

This case was specifically focused on the effect of the question of whether an employee had resigned would have on her entitlement to unemployment benefits.  But the question of whether an employee quits or is terminated involuntarily can be important in other contexts as well.  Depending on the circumstances, it might be important to avoid jumping the gun when an employee threatens to quit and even takes pretty clear steps toward resigning.