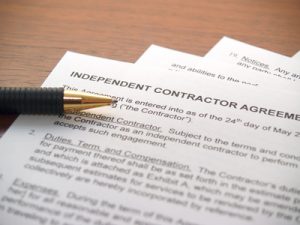 If a Worker Calls Himself an Independent Contractor, Isn’t that Enough?

Posted in Virginia Employer Law
the situation A worker enters into an independent contractor agreement with a company to provide some general maintenance work.  But then after the worker is injured in an accident, he claims he is entitled to disability benefits as an employee of the company, along with some unpaid overtime.  Is there any way for him to […] READ MORE

Posted in Fair Labor Standards Act (FLSA)
The DOL is continuing in its initiative to address misclassification and make sure there are more employees and less independent contractors in the future. The Wage and Hour Division of the DOL issued Administrator’s Interpretation 2015-1: The Application of the Fair Labor Standards Act’s “Suffer or Permit” Standard in the Identification of Employees Who Are […] READ MORE

Uber driver found to be employee and not independent contractor

Posted in Other
A big issue facing Uber and other similar on-demand car service companies is whether their drivers are independent contractors or employees. This classification issue is tricky for employers of all types and sizes — as the lines aren’t always clear and the implications significant. Earlier this week, the California Labor Commissioner ruled against Uber, finding […] READ MORE